It felt like the longest yet the shortest year ever. Who could have imagined that we’d still be living Covid-restricted lives at the end of it? Yet here we are. And behind us? A busy year of doing things differently.

We continued Yours to Protect work with other Ontario groups, raising public awareness of the growing number of attempts to develop on the Greenbelt, on prime farmland, on precious watersheds. We can’t ignore what’s happening outside the Federal Lands, not least because the City of Pickering, bent on pursuing massive urban sprawl across its agricultural north, is using the promise of an airport to justify everything, building it into planning docs and promotions. And shrugging at climate change.

We were also obliged to refute, in screaming black and red posters, the Big Lie that Pickering and the Region of Durham keep repeating. We’ll shout yet again: The KPMG Report DID NOT SAY an airport would be needed by 2036. It said the opposite – over and over. We won’t stop calling out this Big Lie.

Our new sign highlights the Lands we’re working to protect. Email us if you’d like to pick one up!

In June, we were the proud recipients of a coveted Ontario Nature conservation award for our role in protecting the natural heritage corridor running from the Oak Ridges Moraine to Lake Ontario, through Rouge National Urban Park. Ontario Nature also added the Federal Lands to its Protected Places Story Map. Soon afterwards, Wildlands League invited us to participate in a three-day People’s Summit that brought together conservation leaders from across the province.

Out of that event came The Accidental Oasis, our video journey through the Federal Lands’ painful past, their often achingly beautiful present, and the uplifting revitalization that could be their future if the airport threat were gone.

We also began our lead-up to March 2, 2022, the 50th anniversary of the airport announcement. We’ve started with 50 Ways to Say NO PICKERING AIRPORT! – an inspiring and often funny video collage. 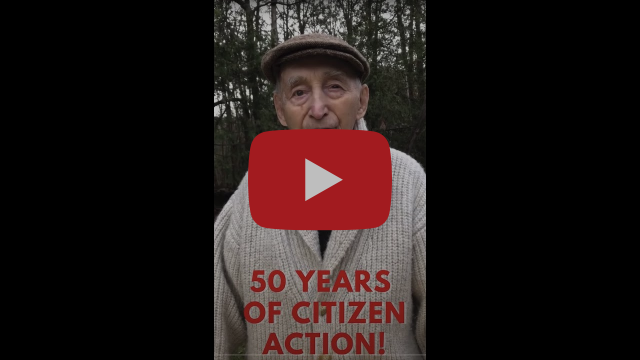 If the video kindles an urge to add your voice, it’s not too late. We’re receiving more NO PICKERING AIRPORT! mini-videos all the time, so we’re planning on a second edition. Keep your video short, use those three words in any language, be creative, shoot vertically, and send to: landoverlandings@gmail.com.

Last but not least, to all our wonderful supporters, stay safe and well, and know that we couldn’t do what we do without you. THANK YOU!