Durham Regional Council has voted to support a Climate Change Emergency Declaration. Here’s our delegation to Regional Council and the accompanying visual presentation where we highlight the outrageous hypocrisy of paving over prime farmland for Toronto East Aerotropolis. Read more below. 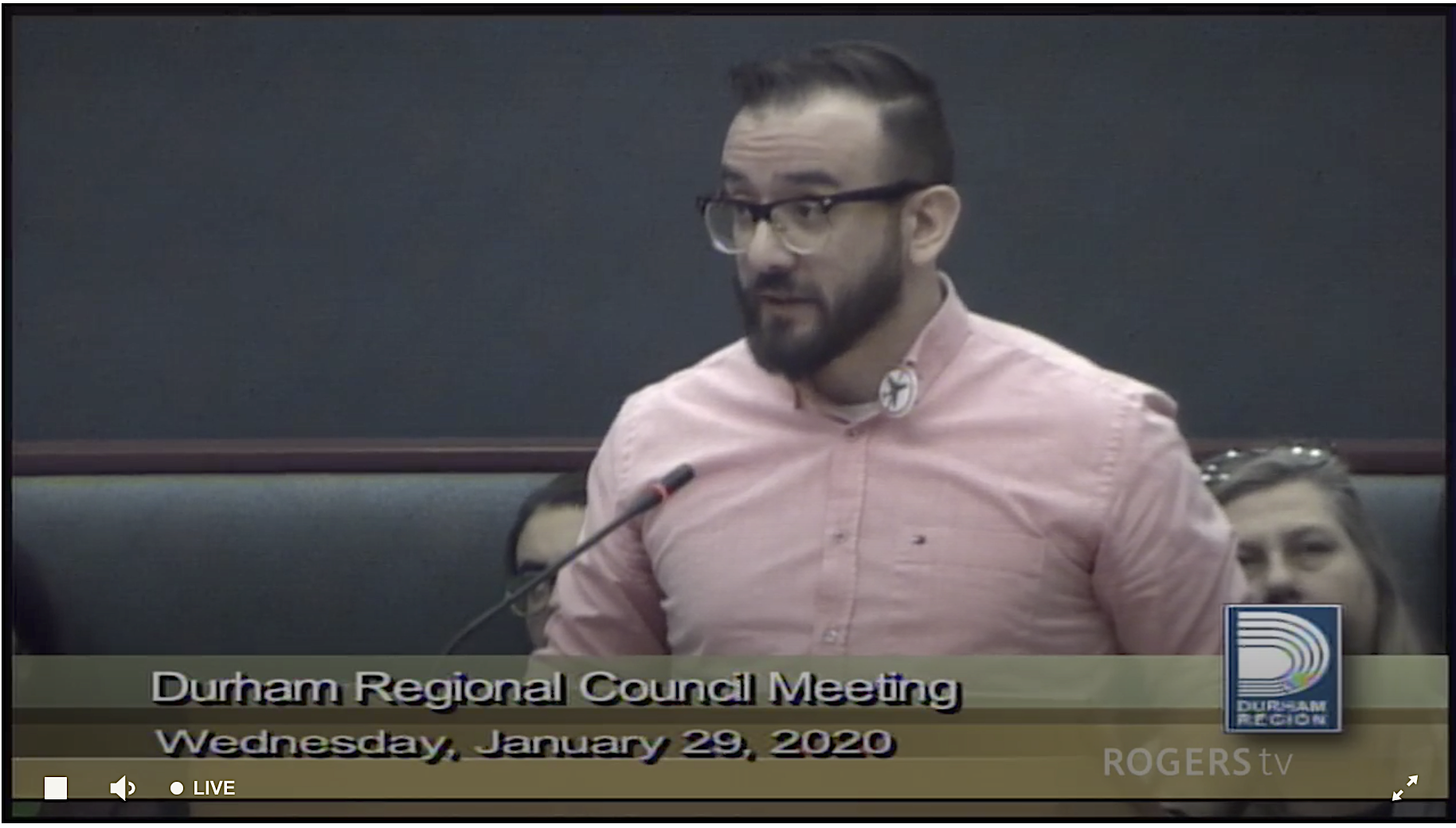 Our generation is the first whose lives will be affected, start to finish, by the climate crisis – a crisis our predecessors, People or Planes, could never have imagined when they launched their fight, in 1972, against an airport on their land. Some of us are the children and grandchildren of those advocates. Some of us are first-generation Canadians. Some of us are young parents. All of us are deeply worried about the future we’re inheriting.

So it’s a relief to see Durham Region joining hundreds of other Canadian jurisdictions in recognizing the climate emergency. Individuals, businesses, and citizens’ groups will all have an important role to play in lessening the impact of the crisis. But as the Declaration suggests, the pivotal role belongs to government – at all levels. The resolve, informed actions and leadership, regulation, and oversight of government will mean the difference between success and failure.

But a Declaration is just that. As Greta Thunberg said in Davos, platitudes are not enough. Her fellow panelist, 15-year-old Indigenous Canadian, Autumn Pelletier, told Canada to “Warrior up!” She meant ACT! Our first action? To demand an end to the pursuit of a massive new airport complex and urban centre in North Pickering. The idea is flat-out incompatible with climate-change mitigation. A Pickering airport would lock in a permanent, massive increase in GHG emissions in Durham Region. 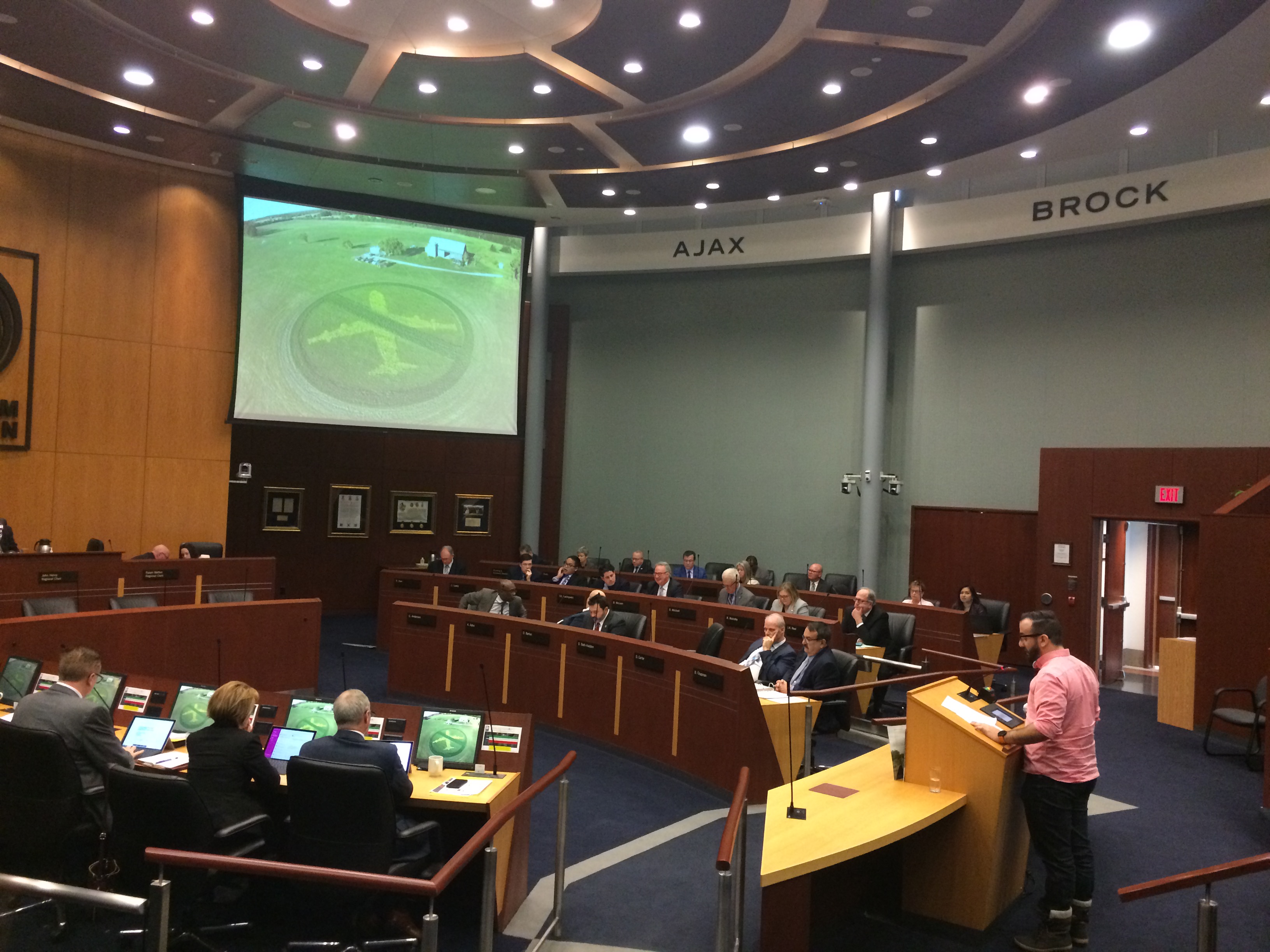 The UN tells us that infrastructure construction is the source of 11% of global emissions. In Pickering, the emissions released by construction would be followed by those caused by the ongoing operation of the airport and everything built around it. No mitigation effort by the Region could neutralize or reverse that output and the damage it would do.

Today, North Pickering’s thousands of acres of prime farmland – its crops, watersheds, and trees – act as a carbon sink, converting carbon into biomass and helping to stabilize our emissions tally: one acre of farmland permanently removes between two-thirds and three-quarters of a metric tonne of carbon every year.

Tomorrow, those acres could supply the Region and the GTA with fresh local food and thousands of new, sustainable jobs. Our rich soil and temperate climate are capable of supporting over 200 different types of agriculture: a wide range of field crops, dairy products, meat, and wool fibre.

Some of you have argued for putting indoor vertical farms and greenhouses on the Lands alongside an airport. But while outdoor farming takes advantage of the riches and conditions that Nature provides, free of charge, indoor artificial environments are energy hogs. Consider this: Research shows that local vegetables grown in a greenhouse have GHG emissions 10 times higher than those grown in a farm field. Even in cold weather months, the GHG emissions from indoor-grown vegetables remain substantially higher than those of their imported, field-grown counterparts. And indoor crops are mostly salad greens, tomatoes, herbs. Indoor farms can’t grow root vegetables or cereal crops or orchards, let alone raise livestock. And they don’t capture carbon.

The Declaration states that “climate change considerations will be embedded across all elements of Region business.” Excellent! That commitment bodes well for the health of North Pickering, because the aerotropolis idea – if the federal government ever approved such a plan – would fail every test. North Pickering’s farmland, on the other hand, would contribute in direct, crucial ways to the Region’s mitigation and resiliency efforts.

Please. Let’s not take this airport fight to a fourth generation. Let’s end it now, together, and focus on the real fight that unites us all – battling the climate crisis. My generation – your children and grandchildren – will have to live with the decisions and actions you take today. Don’t let us down.

North Pickering’s 9000 acres of prime farmland – its crops, watersheds, and trees – act as a carbon sink, converting carbon into biomass and helping to stabilize our emissions tally: 1 acre of farmland permanently removes between… Click To Tweet