Top
You are here: Home / News / Latest News / Getting closer to our goal! 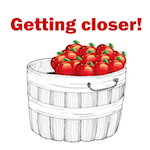 WOW!!! There’s no better word to describe the overwhelming support we’ve received in just six weeks! Our sincere thanks to individuals like you who have brought us so close to our goal in such a short time. And our special thanks to Margaret Atwood for her generous $1,000 matching gift – which was matched within hours.

Accompanying the donations come wonderful comments, messages of appreciation, and poignant stories. Celia Klemenz, designer of our great logo, gave money from the sale of her Saskatchewan farm, saying that selling tore out a piece of her heart and prompted her to donate to the cause of saving farmlands. And former Torontonian, Karen McNair, now of Ladner, south of Vancouver, sent a generous cheque because she lives on an agricultural preserve and has seen firsthand how important it is to stand up to the never-ending threat of developers.

Thank you to everyone who has donated so far. We hope to be able to tell you soon that the study is under way. The sooner we reach our goal, the sooner our study starts.

Durham Regional Council has voted to support a Climate … END_OF_DOCUMENT_TOKEN_TO_BE_REPLACED