RESULT!! The City of Pickering council chambers and lobby were overflowing last night as supporters of farmland came out in force to say No Airport. Over 30 delegations were heard. Over 100 people remained till well after midnight to hear Council make the right decision.

A small amendment in a 200 page staff report would have passed had we not been there, meaning that the City  – for the first time in 45 years – would have asked the Federal Government to fast-track the building of an airport. Instead, the offending sentences were carefully re-worded back to council’s original stand, asking Ottawa to expedite a decision on an airport. 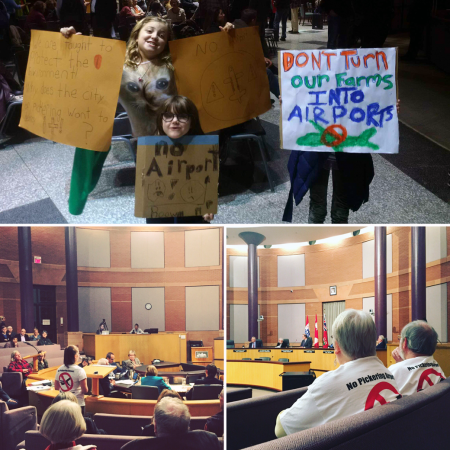 The next generation speaks out!

Despite the Mayor and several councillors expressing their strong desire for an airport, Councillor Maurice Brenner was able to finesse the wording in such a way that a unanimous decision was reached and a strong message sent that the people must have a voice. Pickering must not demand an airport in the absence of a business case and before several studies, including Land Over Landings’ study on the economic potential for agriculture, are completed. Councillor Bill McLean further pointed out that Ward 3 has stated strongly that it wants a by-election soon. Council is within its right to appoint, but Land Over Landings’ Chair and others reminded Council that in almost 45 years, north Pickering has never elected a representative who was not publicly opposed to an airport.

Thank you to everyone who came out, including a strong delegation representing the Toronto food movement. The quote of the night goes to someone from south (urban) Pickering, who warned Council that if they do not do the right thing and listen to the people, that this spark of outrage in north Pickering “will ignite a bonfire throughout the entire city, just as it did 44 years ago”.