It’s been called the longest continuous protest movement in Canada’s history. The fight to stop the Pickering Airport marks half a century on March 2, 2022. And it’s not over. 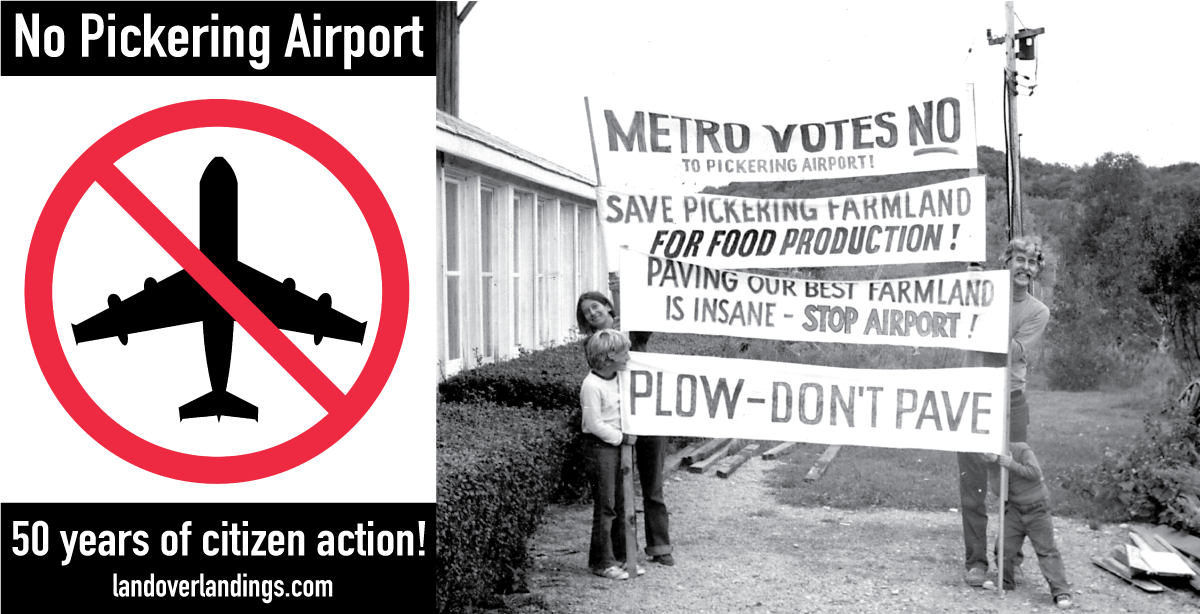 It began with simultaneous federal and provincial announcements of a new airport and new city. Then came the shocking expropriation of 18,600 acres of farmland and hamlets in Pickering, Markham, and Uxbridge townships by the Liberal federal government of Pierre Elliot Trudeau. After that came the expropriation of 25,000 acres of rural land to the immediate south by the Conservative provincial government of Bill Davis. The federal land was for a major international airport. The provincial land was for a large satellite city to support it. The airport was never built, but it was never cancelled either.

The announcements ignited a massive citizens’ uprising. Farmers, business people, artists, and hippies coalesced to form People or Planes – a brilliant resistance movement that would chart a path for similar movements around the world. The support for their protest was huge and included the backing of the metropolis next door. Toronto City Council and its upstart young mayor, David Crombie, advised Ottawa “in the strongest possible terms” of their disapproval of the expropriation for the airport, and called the Province’s plans for an adjacent city “the height of folly.”

Today, the provincial land has been mostly sold back to former owners, and the remainder of the farmland has been developed or is slated for development. In recent years, half of the federal airport site has been saved in perpetuity as part of Rouge National Urban Park, but the rest is still being held for an airport. The good news is that it remains mercifully undeveloped, a sort of “accidental oasis.” The bad news is that it remains at high risk.

Since 2005, POP’s successor, Land Over Landings, has been a constant, vocal advocate for saving the Federal Lands. We were instrumental in getting the first half of the Lands protected. In 2018, we released “A Future for the Lands,” an attention-getting report on transforming the remaining 9,000 acres into an agricultural and agri-tourism hub. The plan, North Pickering Farms, would create over 2,100 jobs and nearly $240 million/year in economic activity while ensuring a secure food source for Canada’s largest population base. It would end this costly limbo. The latest federal study, this time by KPMG, could find no need for an airport in the foreseeable future.

Our goal has always been (a) a cancelled airport and (b) protected farmland and watersheds. The intensifying climate crisis makes achieving those goals a matter of increasing urgency. The ultimate decision lies – in a twist of fate – in the hands of Prime Minister Justin Trudeau, whose father’s government was responsible for the original expropriation. Fifty years on, it’s time to reverse that decision. It’s time to protect the greenspace and food land to meet tomorrow’s most essential needs.

This story is both historic and current, as much about the future as about the past. It runs the gamut of human emotion, from rage and despair to determination and hope. It’s about politics, ethics, food justice, the environment, and social movements. It’s about the kind of critical decisions that all of society and every level of government face as we balance on the edge of an existential precipice. It’s also a celebration of what can be accomplished by everyday heroes and by 50 years of relentless, unstoppable citizen action!

The Accidental Oasis: 10-minute video on the past, present, and future of the Pickering Federal Lands

The Big Lie Exposed: Supporters of an airport in Pickering insist on repeating the Big Lie that KPMG “determined that the GTA would need a new airport by 2036.” KPMG did not say this, as we show here.

A Future for the Lands: The executive summary of the report of a study to assess the economic impact of the remaining Federal Lands if returned to permanent agriculture.

Maps of the Pickering Federal Lands

Then / Now / Next: 21st-century reasons for cancelling Pickering airport

What Has This Boondoggle Cost Us?: A look at how the federal government has spent taxpayers’ money on the airport project since 1968.