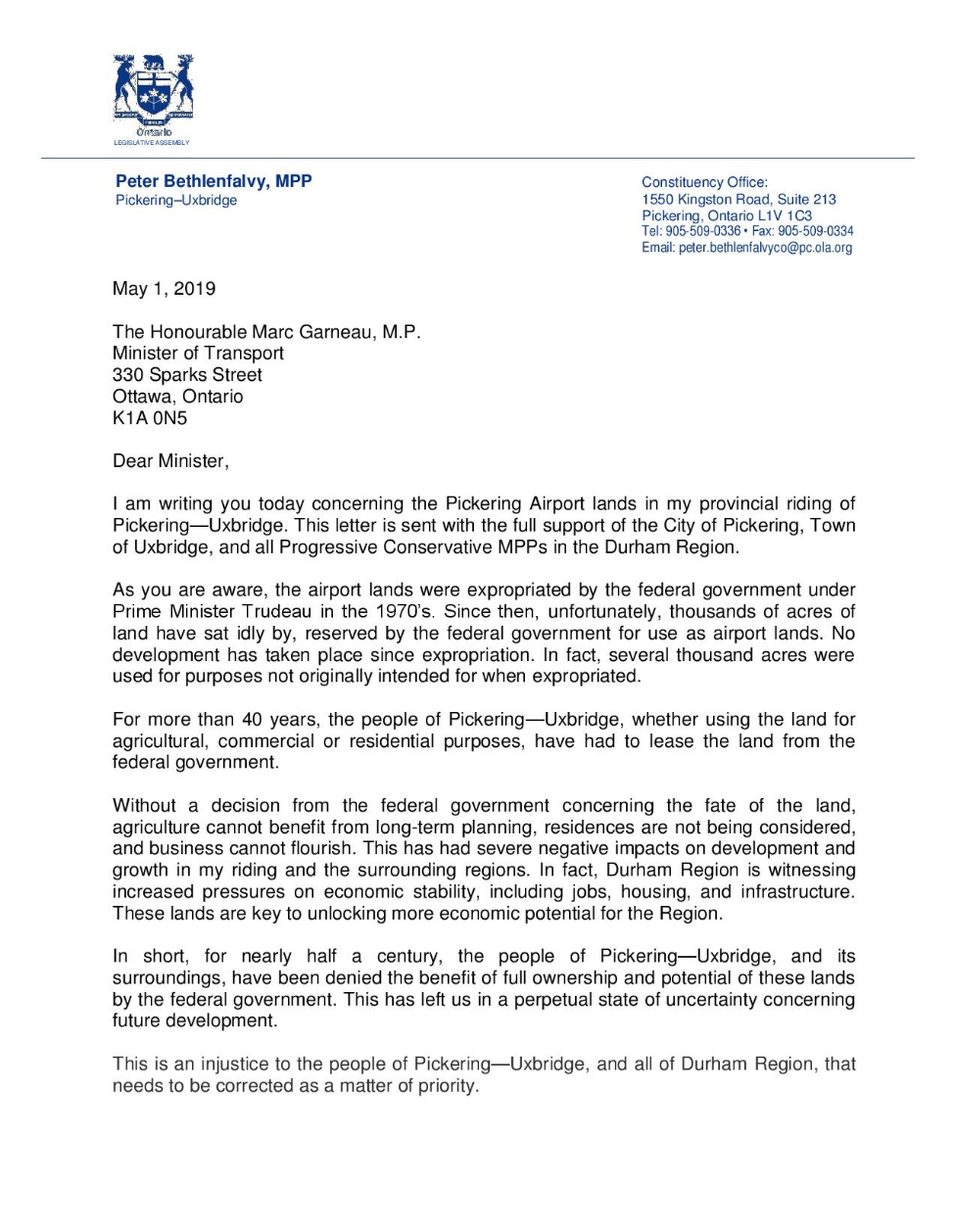 Those words could have been written by Land Over Landings, except that we tend not to say “Airport Lands”. The words nicely encapsulate our argument for the creation of North Pickering Farms, to trigger the economic revitalization of the Pickering Federal Lands. But the words aren’t ours; they are those of Pickering-Uxbridge MPP Peter Bethlenfalvy, introducing, on his website, a letter he recently wrote to Marc Garneau, Minister of Transport.

In the letter, he decries the wasted potential and perpetual limbo caused by half a century of indecision on the Lands. He calls on the Minister of Transport to provide certainty on the development of the Lands in the near term by releasing the most recent aviation study, or else, to return the Lands to the people of Pickering-Uxbridge.

It’s only on this latter point that we part ways with Mr Bethlenfalvy. The suggestion is fraught with legal and ethical implications, given that the Lands were expropriated from private citizens for a public good. The complications arising from any decision to pursue this option could result in years of delay, preventing any sort of revitalization for another generation.

Mr Bethlenfalvy mentions that “several thousand acres [of the expropriated land] were used for purposes not originally intended for when expropriated.” This is true. But those acres remain in federal hands and the transfer from one federal department to another, relatively easy to enact, was carried out for the public good. The 10,200 acres in question became part of the newly minted Rouge National Urban Park, created by former Conservative Prime Minister Stephen Harper for the use and benefit of all Canadians.

We thank MPP Bethlenfalvy for sending this encouraging letter requesting an end to the indecision. Mayor Ryan, in a recent opinion piece in the Pickering New Advertiser, also stated that the wealth of Pickering is in its land. We couldn’t agree more with the essential messages here. Where we may continue to disagree is in how that wealth should be used to enrich all our lives, starting now and carrying on far into the future. The perpetual limbo still imposed on north Pickering has had one extraordinary consequence: the precious land – over 9,000 acres of Class 1 soil, woodlots, and important watersheds – is still there, still belonging to all of us, ready to provide for us all. To nicely complete the Province’s motto: “Ontario is a place to grow – food”!!