Top
You are here: Home / News / Latest News / Our Request For Proposal Is Live!

The RFP can be downloaded here and is also accessible via the MERX public tenders service. 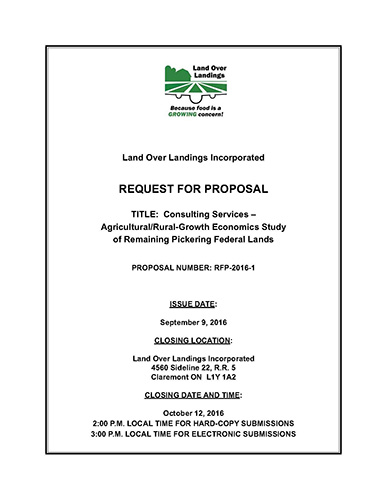 The study will include an in-depth analysis of the Lands’ maximum agricultural economic capability, the varied opportunities for rural growth, and other economic benefits to be had from restoring permanent agriculture to the area.

For more than four decades, Transport Canada has commissioned study upon study to try to prove that a Pickering airport is needed. All failed at the task. A new two-to-three-year study is now under way. Like the others, it will be funded with taxpayers’ money.

Meanwhile the north Pickering area declines, economically and in every other way, held hostage by a 1960s plan that was flawed from day one. Now it’s 2016, and forecasters are mumbling about possible need for an airport in the 2030s or maybe later. No assurances. At least another generation away…

Incredibly, there has never been a study, federal or otherwise, of the possible economic and societal rewards if this prime farmland were used to its maximum agricultural potential. Such a plan of action could start bearing fruit (perhaps literally) within a year or so – and it would certainly create more and more jobs as it took root: jobs now, not a generation or more from now – if then.

So our study will be the first of its kind. And unlike Transport Canada’s studies, we expect we’ll have to fund it ourselves, with the help, we hope, of those who believe, as we do, that preserving our best foodland and cleanest watercourses, within Canada’s largest urban centre, for the health and wellbeing of future generations, is the right thing to do.