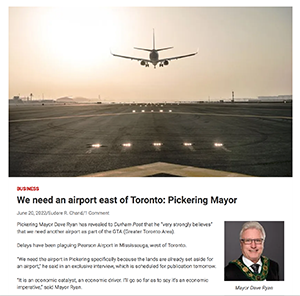 For Durham Region mayors, councillors, and other interested parties

In these articles we learn that, despite our dangerously heating planet, despite the aviation sector’s current disarray and mounting challenges, and despite a clear statement by Transport Canada after the latest aviation study that no business case exists for a Pickering airport, the mayor and regional chair persist in pushing for one anyway. How do they justify this?

Mayor Ryan is reported to have revealed to Durham Post that he “very strongly believes” the GTA needs another airport. Very strong belief is no evidence of need.

He says we need the airport in Pickering because “the lands are already set aside” for it. When did having land set aside for anything constitute proof of need?

He says “it’s an economic catalyst.” But “it” doesn’t exist. And it doesn’t exist because Transport Canada’s in-depth studies couldn’t find any requirement for it.

He claims that Pickering can’t “provide meaningful jobs” for area newcomers unless it has this “economic driver.” But Canada’s biggest international airport is less than an hour away. A superfluous airport is no economic driver. It’s a financial liability.

He says “I would like to have an airport here rather than go across the city to pick up my wife every time she travels to see to her mother.” No disrespect, but this inconvenience is no reason to spend billions on a facility whose very construction, before the airport even opened, would vastly add to Pickering’s and Durham’s GHG emissions. And would it help him? He’s on record as promoting “an industrial-style airport” or maybe something “specific to cargo.” Neither would offer passenger service.

Chair Henry, in his interview, is quoted as saying that “this is a federal issue, and they need to make a decision, and then we need to go forward.” Slippery words. “Make a decision” means to decide yes or no, but he means only yes. For him, the airport would be used for “some travel” but would be focussed on rebooting the Region’s aerospace industry and on providing an opportunity to deal with “the challenges related to climate – that we’re going to have to start to grow more food indoors.” For this, he promotes vertical farming.

About vertical farming, he says “I believe it can be done on those lands and it should be done, so that we can make sure that our residents have that food security.” Belief again, but no proof that such an enterprise would be viable or even beneficial. Vertical farming this far north, especially year-round, as he foresees, comes with huge energy costs that make for pricey products. And those products (various salad ingredients, such as the tomatoes he mentions) are no substitute for the essential foods (root vegetables, field grains, pulses, tree fruits, meat and dairy products) that outdoor farming on the Lands would deliver to a hungry populace. Year-round availability of locally grown tomatoes doesn’t provide food security. As explained in our report “Indoor Farming and North Pickering,” food security comes from access to sufficient nutrient-rich staple crops – the kind of crops that vertical farms cannot grow. 5

He also says that “with those lands we have an opportunity to use them 365 days in a year.” A positive step, then? No. An airport and vertical farms on the Federal Lands would smother hundreds of acres of rare Class 1 farmland. Any outdoor farming on the unpaved part (and even beyond the airport site’s boundaries, including within Rouge National Urban Park) would be restricted in all sorts of ways by federal aviation hazard-zone safety regulations. Does year-round access to local salad ingredients really offset the permanent loss of prime farmland that is fully capable of significantly enhancing the GTA’s food security? Not even close.

Chair Henry apparently told the interviewer that “the report that was generated around building the airport said you would need an airport in about 16 years.” It did not say this. KPMG’s study covered the years 2016-2036. It found that no passenger airport would be needed during that period. It didn’t look beyond 2036 or hazard any guesses. While the study looked at a small sub-set of scenarios for various other airport types, the report described these as “exploratory” exercises based on assumptions that had “a significant level of uncertainty” associated with them, and cautioned that no definite conclusions should be drawn from them.6

Bottom line: Transport Canada just spent $800,000 of taxpayers’ money to see if a business case could be made for a Pickering airport and the answer was no – a conclusion confirmed in writing to our Regional Chair by then Transport Minister Marc Garneau on March 25, 2020. None of this is a secret.

In the Post article of June 20, Oshawa’s Mayor Carter suggested that the federal government has been “gun shy” regarding an airport. But Ottawa has had good reason to skip the “several opportunities” to “approve this [airport] and get shovels in the ground”: not one of their years-long needs-assessment studies has been able to determine when, or even if, a Pickering airport would be required. Another name for “unneeded airport” is “huge, costly mistake.” Like Mirabel. Ottawa isn’t going there again.

Our world is in crisis! Durham’s regional and municipal politicians must drop this blinkered, futile promotion of a never-never airport. They must refocus their energies on helping their citizenry prepare for, and survive, the life-threatening climate change that’s already upon us and risks afflicting every day of our lives from now on.