The most powerful moments came when we viewed two farms a few kilometres apart – one within the Federal Lands, the other just outside, both operated by families who had bought their north Pickering farms before 1972, and at roughly the same time. The expropriated farm, leased back by its original owners for decades, reflects the weariness and uncertainty that sum up life on the Lands – the grueling reality of trying to run a business, plan for the future, and make ends meet on one-year leases. The other farm, just outside the depressed federal zone, is clearly prosperous, with brightly painted barns and shiny equipment.

At the end of the tour, we also gave Dr Polonsky the Supplement to our Submission – many more strong arguments in support of our case and a list of the growing numbers of farm, environmental, and political leaders who agree with our call for an agricultural study to show the economic potential of these Lands if freed from the stranglehold of year-by-year leases.

In the meantime, there’s yet another aviation study on the horizon. It was supposed to be looking into the whole Southern Ontario aviation system, according to former Transport Minister Lisa Raitt last July. But it has bizarrely been styled by Transport Canada as a “Pickering Lands Aviation Sector Analysis.” We know nothing more about it. It has never been publicly announced. But it’s expected to take 2-3 more years to complete (they all do). You have to wonder how many millions (tens of millions?) of dollars will be spent in trying, yet again, to prove the need for an airport here, when the generator of the region’s economic strength and prosperous future lies right beneath our feet.

Dr Polonsky’s report was submitted to Transport Canada at the end of March. Now we wait. Will the department release it sometime this year? Or in 3 years’ time? Or not at all?

You’ll find links to the Supplement and our November 18 Submission on the Resources page.

Even in these strange times, winter slowly, inexorably … END_OF_DOCUMENT_TOKEN_TO_BE_REPLACED 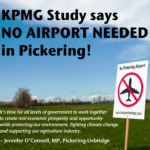 Durham Regional Council has voted to support a Climate … END_OF_DOCUMENT_TOKEN_TO_BE_REPLACED