Top
You are here: Home / News / Latest News / What kind of city do Pickering residents want? 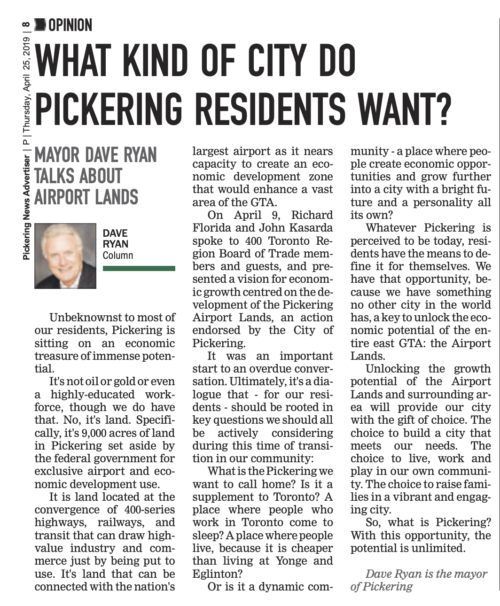 We took the liberty of making a few edits to Mayor Dave Ryan’s column in the News Advertiser on April 25, 2019

Well-known to most of its residents, North Pickering is a treasure of immense potential.

Free from highways and protected from sprawl there is land. Specifically, 9000 acres of Class 1 farmland, expropriated by the federal government for an airport that was never built, due to the lack of a viable business case.

It is land located at the convergence the Rouge National Urban Park, Ontario Greenbelt and Oak Ridges Moraine. Land that can create high-quality food and draw in tourism just by being put to use. It is land that can provide the nation’s largest city with food security, clean air, fresh water, outdoor recreation and green space.

On April 9th, in Toronto, two American business consultants presented a vision for economic growth centred on the development of an airport on the Federal Lands. This came almost a year to the day after Land Over Landings released their agricultural study, “A Future for the Lands: Economic Impact of Remaining Pickering Federal Lands if Returned to Permanent Agriculture”.

This study provided an important perspective overlooked by the City of Pickering for decades. Ultimately, it’s a perspective that provides residents, and concerned Canadians with an alternative to industrial development through the creation of small-scale, sustainable farming during this time of increasingly dire climate change emergencies and food security crises.

What is the Pickering we want to call home? Is it concrete sprawl? A place to fall asleep to the roar of jet engines? A place where we squander away invaluable land to fulfil the dreams of a handful of local politicians and aviation enthusiasts?

Or is it a sustainable community — a place where people create economic opportunities through farming and tourism, where farmers grow food for our city, and future generations thank us for acting to combat climate change before it was too late?

However North Pickering has been neglected in the past, the Federal Government, with input from residents, now has the opportunity to rebuild this community through the development of North Pickering Farms. We have that opportunity because we have something no other city in the world has: access to 9000 acres of prime foodland, preserved by almost half a century of indecision.

Reclaiming the growth potential of the Federal Lands will provide the city, the province, the nation, with the gift of continuous and reliable food production. The gift of a sustainable, prosperous and healthy future for our children. The choice to be a city that can look back at its actions with pride and be recognized for taking drastic measures in the face of a climate emergency. The choice to live, work and play in our own community. The choice to raise families in a healthy and self-sustaining city.

So, what is Pickering? With this opportunity, the potential is unlimited.

So, what is Pickering? With this opportunity, the potential is unlimited.

Reclaiming the growth potential of the Federal Lands will provide the city, the province, the nation, with the gift of continuous and reliable food production. The gift of a prosperous and healthy future for our children. Click To Tweet