Last year, residents of Durham Region – including members of Land Over Landings and Environmental Action Now Ajax-Pickering – rallied to save Duffins Creek. Now we’re fighting to protect the headwaters of Carruthers Creek, and much more. It’s easy to see the value of specific natural areas in our communities – but the Municipal Comprehensive Review (MCR) is harder to wrap your head around because the complex government process will determine how much green space and farmland is opened up to growth before it decides where! In a nutshell, we’re defending abstract acres – an as-yet-undefined chunk of land somewhere in Durham Region, most likely areas of prime farmland and Class 1 soil, vital carbon sinks, and natural habitat.

Because the MCR is already well underway and big developers are lobbying hard for more land for sprawl, it is urgent that we all get involved!

What is the MCR?

Even though local councillors don’t get to decide how much growth is coming to Durham Region, they do have to decide where to house those people and there are basically three options.

Some intensification in existing built-up areas is good. But the best way to accommodate lots of new people is to build dense, walkable communities with different housing options in the Greenfield Areas that are currently undeveloped/underdeveloped but already zoned for development (DGAs).  There’s a more detailed explanation below – but putting more people and jobs per hectare into DGAs will reduce sprawl and traffic congestion and save taxpayers money!

TELL DURHAM REGION COUNCILLORS TO SAY NO TO ENDLESS SPRAWL

What land is at risk?

Because of the way the MCR is designed, Regional Councillors will have to decide how much land to open up to developers before they decide where.

While we don’t yet know what land will be redesignated, what we do know is that all of the land that is marked in green on the map below is outside of the current urban boundaries but not protected by the Greenbelt.  Much of it is prime agricultural land or wetlands that help prevent flooding downstream. Any of it could be redesignated for development depending on the outcome of the Municipal Comprehensive Review. 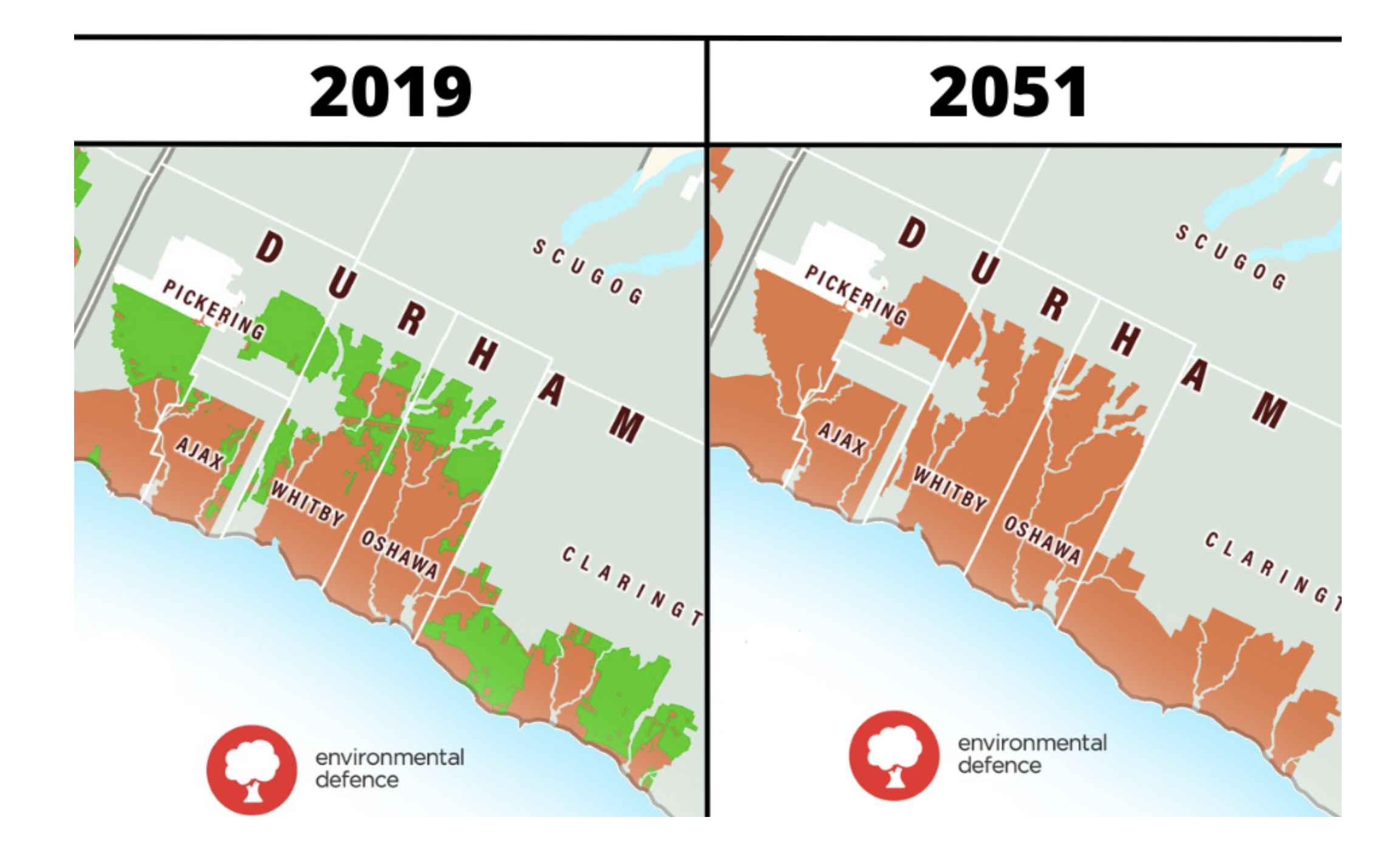 How much additional land will be needed?

As we mentioned above, there are three possible places to house people: the existing Built-Up Areas (BUA), Designated Greenfield Areas (DGAs) and farmland and greenspace outside the settlement area boundary, sometimes referred to as “the whitebelt”.

Together, the intensification rate for BUAs and the targets for people and jobs per hectare in new developments on DGAs determine how many people can be housed INSIDE the current settlement area boundaries. If that number is less than the growth that has been assigned to Durham by the Province, new land must be opened up.

The best place for councillors to take action to prevent sprawl is during the part of the process which sets the intensification rate and the targets for people and jobs per hectare, which happens before they ever talk about which land might be opened up to development. So – unfortunately – that means that ordinary citizens like us have to read up on planning jargon like Designated Greenfield Areas and Existing Built-Up Areas.

What are Designated Greenfield Areas?

Designated Greenfield Areas (DGAs) are lands that were set aside for development in previous planning cycles but haven’t been built on yet. Durham has over 10,000 acres of land like this and it’s the perfect place to concentrate new homes and businesses without excessive pressure on existing neighbourhoods, or expanding our urban boundaries further out into farmland and natural areas.

Under older provincial legislation, new developments in DGAs had to provide at least 80 people and jobs per hectare. This density is ideal because it creates walkable communities that can support public transit and pay for their own infrastructure and services. Unfortunately, the current government reduced the minimum number of people and jobs per hectare for DGA development from 80 to 50.  Developers want us to build FEWER HOMES inside the city limits so all the land they own outside the current urban boundaries will be assigned for future growth and will skyrocket in value. Instead, Durham Region should stick with the old minimum of 80 people and jobs per hectare and turn our DGAs into 15-minute communities with easy access to services and public transit.

What are Existing Built-Up Areas?

Existing Built-Up Areas (BUAs) are all the places we already have homes and other buildings.  The “intensification rate” determines what percentage of new residents can be housed within existing built-up areas. Sometimes that means replacing a few houses on large lots with a row of townhouses. Sometimes it means allowing garden suites for relatives or apartments with separate entrances in existing homes. Sometimes it looks like adding a condo with underground parking to an existing shopping plaza.

The minimum legal intensification rate for BUAs is 50%. In Durham Region, planning staff have stated that existing built-up areas can easily accommodate 50% intensification – or more.  That means it is up to Durham residents and our councillors to determine how much intensification is right for us.

Hamilton city council recently chose between a 60% intensification rate (which would have allowed 3,212 acres of new sprawl), and an 81% intensification rate. They voted for 81% and no urban boundary expansion onto farmland!  81% might be too much for Durham Region, but we can accommodate more than the bare minimum – especially if we remember that doing so will save hundreds of acres of farmland and green space.

In addition to developing around transit hubs, another good way to raise our ‘intensification rate’ is to allow more people to build second units on their properties.  Currently, the Municipal Comprehensive Review is suggesting that only 3% of homes will have a second unit by 2051 – but with our ageing population and growing families, we should aim for 5 or 10% of homes to have second units.

A little bit of intensification could make Durham Region a nicer place to live. Most areas of Durham Region aren’t currently dense enough to support reliable public transit or walkable communities. Adding gentle density in the form of townhomes, garden suites and low-rise apartments near transit hubs will improve public transit, allow new local restaurants and businesses to flourish, and save taxpayers money. Research shows that low-density suburban development is more expensive for taxpayers than building in areas that already have roads, sewers and other infrastructure.

Having a greater mix of housing types also means that people who want to walk, bike or take the train to work can do so – keeping cars off the road and reducing congestion throughout Durham.

What can I do?